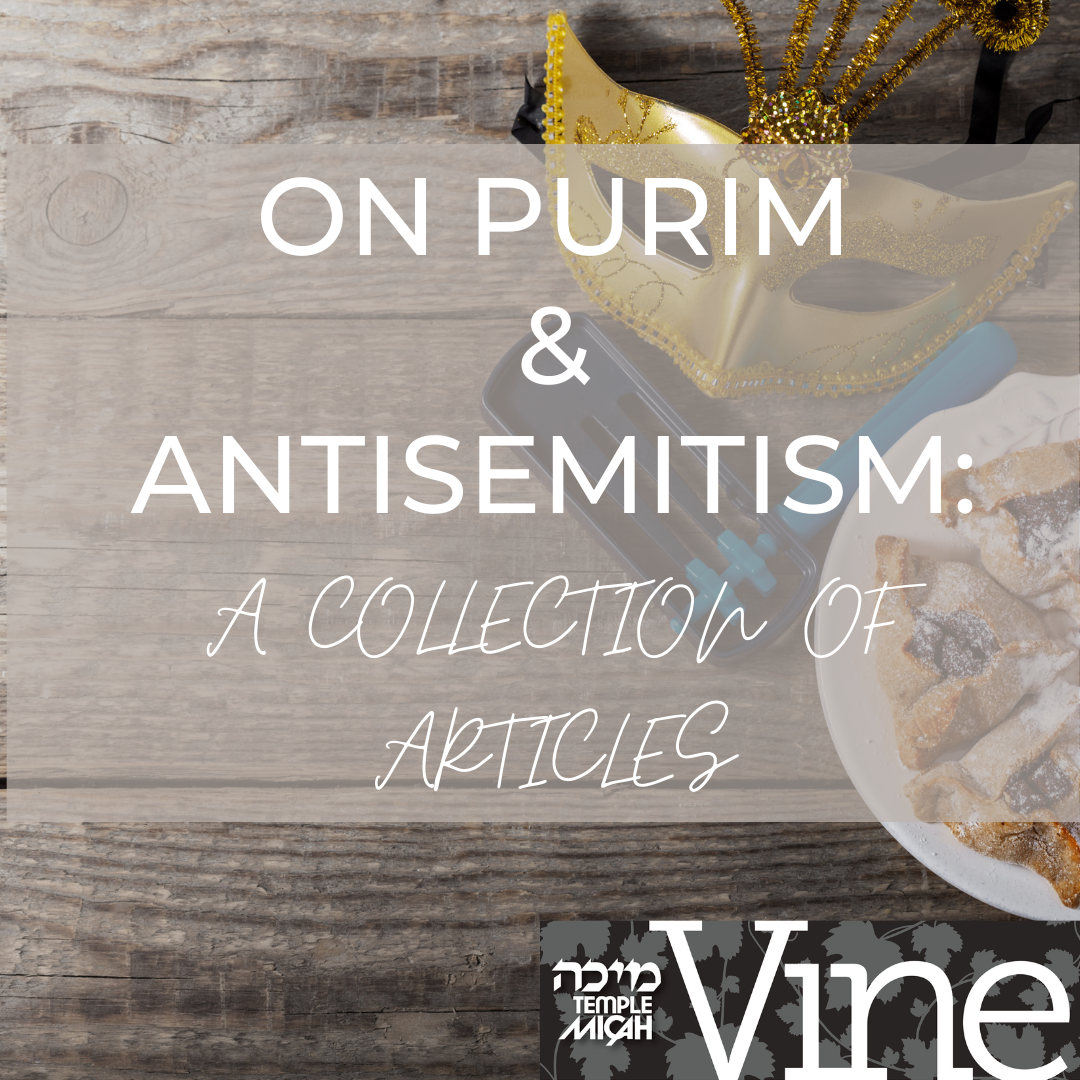 On Purim and Antisemitism: A Collection of Articles

For Such a Time as This: Purim and Rising Antisemitism

I have never been a big fan of Purim.

This may go back to my earliest childhood Purim memory, when I cut my finger on my grogger during services. After childhood, I was never really a costume person and, even as a young adult, chafed at the Talmudic injunction to drink until you could no longer distinguish Mordecai from Haman (B Talmud Megilla 7b). In later years, Tel Aviv’s all-night street revelry on Purim would keep Louise and me shuttered in our rental apartment. Purim is every bit the Jewish Mardi Gras festival, a late-winter opportunity to let it all hang out. I prefer to stay in.

This year, however, Purim has me thinking about evil. Evil is a subject that can be a challenge for the liberal imagination, which can seek to avoid its reality as part of the human condition. Evil is sometimes explained as a form of illness to be cured or overcome with education. This is not my liberalism. I think there is evil in the world. Purim reminds me this is so.

Before we get to Purim and the Scroll of Esther, let us turn to the Torah.

The opening chapters of Genesis set an idyllic scene in the Garden of Eden. There is life. There is God’s patterned predictability and order. There is a Tree of Life and a Tree of Knowledge, which may be the same tree. (We cannot be sure, thanks to wonderful literary ambiguity.) There is water and vegetation and plenty.

The opening chapters of Exodus bring us the opposite imagery. There is a Pharaoh in charge who has no knowledge of the past, as he “knows not of Joseph.” Exodus is full of threats: “They will multiply against us.” The water of the Nile becomes a place of death: “Throw the newborn Israelite male children into the river.”

Pharaoh becomes Torah’s symbol of evil and therefore must die, which God accomplishes by drowning him in the sea.

In Purim, Haman joins Pharaoh as a symbol of evil. Why do we need this story? What more does it tell us that we cannot learn from Exodus?

The answers may lie in the fact that the Scroll of Esther is one of two biblical books in which God is absent. (Song of Songs is the other.) As the plot unfolds, so does Haman’s plan to murder the Jews of Persia, as he describes to Ahasuerus: “There is a certain people, scattered and dispersed among the other peoples in all the provinces of your realm, whose laws are different from those of any other people and who do not obey the king’s laws; and it is not in Your Majesty’s interest to tolerate them. If it please Your Majesty, let an edict be drawn for their destruction…” (Esther 3:8-9)

With this formulation, an antisemitic standard repeated throughout our history is unveiled. With no God present as a character, the Jews of Persia are on their own. The only forces that can oppose the evil of Haman are human beings. God will not cause rivers to turn to blood or hail to fall from the sky. No waters will part on divine command. If evil is to be defeated, humans must do it themselves.

This is exactly what Mordecai comes to realize as he speaks to Esther: “Do not think that because you are in the king’s house you alone of all the Jews will escape. For if you remain silent at this time, relief and deliverance for the Jews will arise from another place, but you and your father’s family will perish. And who knows but that you have come to your royal position for such a time as this?” (Esther 4:12-14)

The people who wrote the Scroll of Esther did not expect miracles from God because they experienced none in their own lives and times. The fictitious work we know as Megillat (Scroll of) Esther, recognized in the Talmud (B Talmud Megilla 7a), makes it clear that only humans can oppose evil. Esther comes forward to save her people. She becomes a Jewish hero. But the story does not stop there. In the parts of the book of Esther infrequently read in public, the Jews set out to defend themselves and, in the process, slaughter 75,000 Persians.

The numbers are, of course, sheer fantasy, along with the rest of the story. But the lesson is clear. Evil is real. Jews do not ignore it. They confront evil with force and take vengeance. It is better to wield power than to be powerless.

Here then, is the real reason I don’t like Purim. It forces me think about evil, and to confront images of Jews on a killing rampage. I have also come to better understand the ancient rabbinic solution for dealing with this situation and with the book’s instruction to have a drink, and then another. Turn Purim into a festival for children; put on a costume.

As we live in what feels like an increasingly dangerous world with real forces of evil on the march, I am reading Esther with a renewed interest this year—one need look no farther than the recent assault on Congregation Beth Israel in Colleyville. History teaches us that evil and antisemitism are two sides of the same coin. We must make no mistake. Antisemitism is a face of evil and on the rise. We cannot turn away. We must civilly and peacefully, yet vigorously and strenuously, condemn, confront, and oppose antisemitism with every fiber of our being and from every quarter where it surfaces. This is Purim 5782\2022.

Hating Hate: My Reflection on Purim

My most influential professional mentor once told me he couldn’t stand Halloween. He described growing up in the 1940s as one of the very few Jews in his upstate New York town: his father owned a small corner grocery store, and each Halloween, antisemites would express their anti-Jewish sentiments by breaking windows and painting nasty graffiti and obscene epithets on the store’s outside walls. As a teenager, my mentor would then spend the next two days whitewashing and cleaning the mess.

Completely putting aside the historic origins of Halloween (which we can leave for another column), Halloween came to stand for something very unpleasant for him and his family.

So why am I reflecting on Halloween in the Spring? Ever since my parents dragged me to Sunday school for Purim festivities – of course in costume – Halloween and Purim share space in my mind. Growing up, Purim was often billed for me as “the Spring Jewish Halloween.” After all, we dressed up, there were colorful traditions, we ate tasty goodies (although I’m still taking a Three Musketeer Bar over a three-cornered hamantaschen), we dressed as “heroes and villains,” and we decorated our homes.

Decades later, I still struggle to separate the holidays. Not only do I think about my mentor’s story every Halloween, but it also comes back to me each Purim. Even sitting in the sanctuary watching the gifted Machon thespians belt out a mini-Megillah, my mind wanders to that small New York town and the hate he confronted.

Yes, Purim is filled with singing, story-telling, bad puns about “the whole megillah,” and the celebration of resilience. But Purim also starkly reminds us of the millennia of persecution we have faced as Jews. The story of Esther is just one such Biblical event—antisemitism is still an uncomfortably familiar part of our present. Indeed, we need look no further than the midJanuary terror at Congregation Beth Israel in Colleyville, Texas to be reminded of the vitriol we must confront so often.

This Purim, perhaps we should do more than merely tell the story and reflect on it. In our Micah way, let’s commit to action. Let’s start by looking out for and protecting Jews around the globe and in our own country. Antisemitism continues to take so many forms and we need to remain vigilant. We are all familiar with the obvious: swastikas—the kind of pain my mentor experienced; Twitter hate; social exclusion. But we need to be on the lookout for the more subtle signifiers: code words, stereotypes, slights on the job, and anti-Israel propaganda with a starker undertone. We do not need to characterize ourselves as victims or sufferers; after all, this is not the central, defining feature of our being Jewish. We do need to stand up for ourselves. For some of us, that means engaging with ADL, the Anti-Defamation League. For others, it means taking a hard look and responding to what is happening on college campuses across the country and on social media. We certainly should remain vigilant in protecting our own security as a community. Most important, being part of this dialogue and stepping up to act remains critical.

Yet that does not mean we only look inward. After all, that’s not the Micah way. As modern Jews, we have an obligation not only to protect other Jews, but also to jump in for others under siege. As guardians against hate, we should look beyond antisemitism and seek out ways to protect others who also are targets of such animus. Anti-Muslim bias remains a scourge on our local, national and global communities. Stereotypes, bullying, discrimination and violence towards Asians and Asian-Americans is rampant. Our black and brown friends, members of our broader community, continue to battle discrimination at every turn. Daily aggressions (and microaggressions) are real for these and other groups.

I’m proud of our Micah efforts to educate ourselves. The Racial Justice Initiative over the past year has been one such inspiring community effort. Our discussions about the great teachings of Ibram X. Kendi and Ta-Nehisi Coates have provided us with launching-off points to engage. Our dedicated steps on behalf of new immigrants and against those who champion xenophobia help make a difference. And we can do more. Hopefully we each in our own individual lives can find a way to take these learnings and turn them into action.

Let’s be upstanders for others.

Lamenting antisemitism and other forms of discrimination simply isn’t the answer. Each of us should be challenged to answer the simple question: “What am I doing to combat hate and discrimination?” Perhaps next time you see a fellow congregant, after catching up about family, life and the pandemic, you can share with each other YOUR answer to that question.