Temple Micah is embarking on a new project to help us become an anti-racist community. An outgrowth of last year’s Racial Justice Initiative, this Anti-Racism Study Series aims to:

WHAT WE WILL STUDY

Through a variety of books, articles, videos, and podcasts, we will study white privilege, microaggressions, reparations, education, intersectionality, and more. We will delve into the works of influential authors, including Nikole Hannah-Jones, Ta-Nehisi Coates, Isabel Wilkerson, and Claudia Rankine.

The work of Kimberlé Crenshaw

Join us for the third installment of Micah’s Anti-Racism Study Series on Tuesday, May 10 at 8 pm on Zoom. We will discuss Kimberlé Crenshaw’s work on intersectionality and racism.

A DISCUSSION OF CITIZEN: AN AMERICAN LYRIC by Claudia Rankine

Please join us for the second installment of Micah’s Anti-Racism Study Series at 8 p.m., Thursday, April 7,  on Zoom. We will discuss Citizen: An American Lyric, Claudia Rankine’s best-selling volume about the urgency of everyday racism that endures in America to this day.

Gayle WaldCitizen is an accessible, moving book of prose poems and lyrical essays that asks us to think about racism as it dwells in the ordinary and the particular — or what are sometimes called “microaggressions.”

The discussion will be led by Gayle Wald, a Micah member and Professor of American Studies at George Washington University.

If you have time, read the entire book; if not, Professor Wald suggests reading through section IV.

We recommend purchasing Citizen from a local, Black-owned bookstore, such as MahoganyBooks, Loyalty Bookstore, or Sankofa Video Books & Cafe. You can search for other local bookstores here. 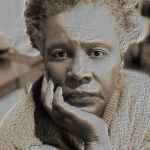 Claudia Rankine is the author of six collections of poetry, including Just Us: An American Conversation, Citizen: An American Lyric and Don’t Let Me Be Lonely; three plays including HELP, which premiered in March of 2020 at The Shed, NYC, The White Card, which premiered in February 2018 (ArtsEmerson/ American Repertory Theater) and was published by Graywolf Press in 2019, and Provenance of Beauty: A South Bronx Travelogue; as well as numerous video collaborations. She is also the co-editor of several anthologies including The Racial Imaginary: Writers on Race in the Life of the Mind (FENCE, 2015).

The Anti-Racism Study Series is part of Temple Micah’s quest to become an anti-racist congregation that is welcoming to everyone and to help members of our community gain a greater degree of racial awareness.

The work of Isabel Wilkerson

Watch the first in a series of monthly study sessions: Power, Racism, and Caste on YouTube.

Led by Micah member Yolanda Savage-Narva, the director of Racial Equity, Diversity, and Inclusion for the Union for Reform Judaism, we read and discuss Caste: The Origins of our Discontents by Isabel Wilkerson.

*We recommend purchasing from a local, Black-owned bookstore, such as MahoganyBooks, Loyalty Bookstore, or Sankofa Video Books & Cafe. You can search for other local bookstores here.