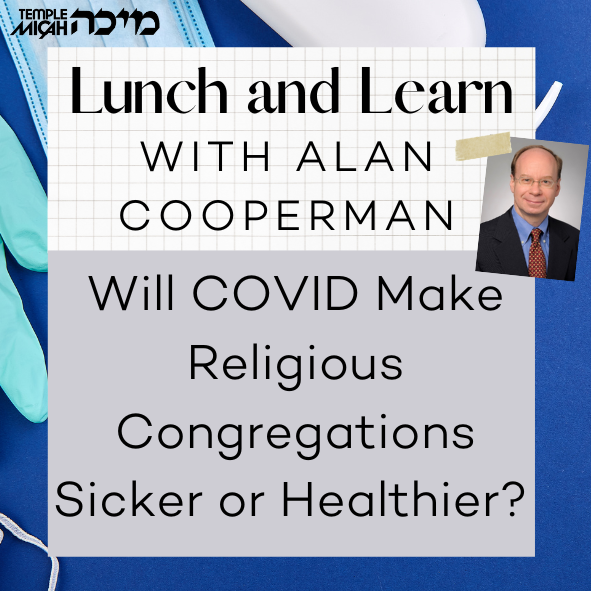 Lunch and Learn with Alan Cooperman

Temple Micah is not alone. The COVID pandemic caused 95% of houses of worship in America to close or restrict their religious services. Thousands of congregations began streaming their services online. Tens of millions of Americans began “attending” their congregations virtually rather than physically. Now that churches, synagogues, mosques and other houses of worship are reopening, will their members come back?

In this lunch & learn session, Alan will share data on nationwide religious trends before, during and after the height of the pandemic. He will ask us to consider whether COVID is an inflection point, a moment that could be as disruptive or productive for religious communities as telecommuting and hybrid offices are for the workplace. He’ll walk us through some sociological theories about religious trends, including the growth of the “nones.” And he’ll lead a discussion of whether Jews in the United States are following the trajectory of Christians in America… or of Jews in Israel.

Register before 5 p.m. the Sunday before the event to attend in-person or by Zoom.

Temple Micah member Alan Cooperman is director of religion research at the nonpartisan Pew Research Center, where he leads a staff of more than 20 researchers who conduct surveys, demographic analyses and other empirical studies of religion’s role in public life around the world. He has edited or co-authored several of the Center’s landmark studies, including its reports on “Nones” on the Rise (2012), Portrait of Jewish Americans (2013), U.S. Religious Landscape Survey (2014), Israel’s Religiously Divided Society (2016), and Jewish Americans in 2020.

He lives with his wife and two sons, who became Bar Mitzvah at Temple Micah, in Washington, DC.