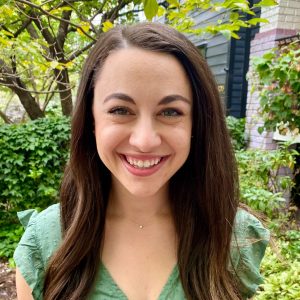 Mckinley Edelman is thrilled to be joining the Temple Micah staff full-time as Community Coordinator after teaching in the Machon from 2014-2019. Originally from California, Mckinley spent most of her summers at URJ Camp Newman. She earned her Bachelor’s Degree in Political Science at the University of California, Santa Barbara, and spent the last seven years working on Capitol Hill, for several Congresswomen hailing from her home state.

Mckinley lives on Capitol Hill with her husband Alex and dog Jonny. They recently welcomed the addition of their daughter, Mollie, in February. In her free time, Mckinley loves searching for DC’s best sushi, perfecting her challah recipe, and attempting a moment of zen with some yoga practice.