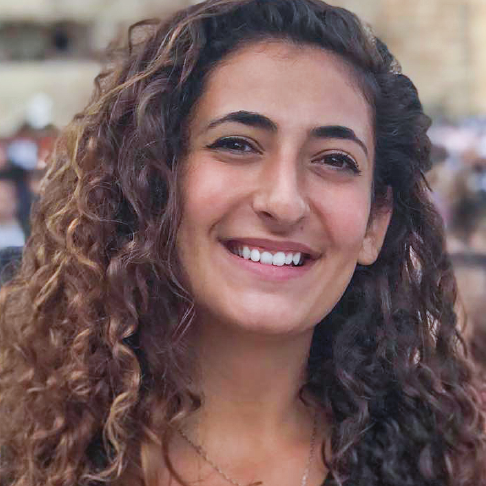 Healy Slakman, the rabbinic intern at Temple Micah this summer, says she was “born to a couple of restless wandering Jews” without a bit of exaggeration. Her early childhood was in San Francisco, her youth in St. Louis, her teenage years in Atlanta.

But there was one anchor. “Amidst the moving and readjusting, a constant in my life was spending each summer in Ramla, Israel,” she said. That’s where her father’s family, Tunisian Jews, live.

Her description of life there is spellbinding.

“We moved through life according to Jewish time. Every day passed in relation to Shabbat—a climactic, intentional, and organized existence. Jewish practice forced us to come together, celebrate, think and commemorate.

“I loved spending Friday nights in my grandparents’ apartment, the hot air fragrant with spices and heavy with song. We kept Shabbat—cousins, aunts, uncles and grandparents sleeping in every corner of the tiny apartment. I looked forward to going with my grandfather and the other men to the Tunisian synagogue with chickens out-front. I anticipated the moment when I would stand beneath his tallit—arms and blessings wrapped tightly around me.”

Slakman, 26, a student at the Hebrew Union College – Jewish Institute of Religion, says her family carried the customs and traditions they practiced each summer to all of their different homes in the U.S.

“Melodies, practices, dishes, celebrations and superstitions” learned in Israel “became infused with flavors of my mom’s midwestern Ashkenazi upbringing and grounded us,” she said of the mixture of Sephardic and Ashkenazi traditions woven into the fabric of her family’s life.

The “two realities” of her Ashkenazi and Sephardic heritage “ultimately pushed me to seek out different Jewish experiences and communities, “ she said, adding, “I stumbled upon Jewish youth group and eventually summer camp. Singing the same words I knew from summers in Israel, but with different melodies and accents drew me in.

“I learned to play guitar because I wanted to hang out with the cool and magnetic song leaders. Long story, kind of short, this is how I started getting jobs in the Jewish world.”

Those jobs began while Slakman was a business major at Eckerd College in St. Petersburg, Fla., where she was involved in Hillel and took on a number of roles at a local synagogue, including teaching Hebrew school and serving several years as a cantorial soloist. After graduation, she worked at a wealth management firm and a synagogue.

“Both the rabbi and the financial advisor I worked for were strong, ambitious and visionary leaders. But the rabbi also operated and made decisions from a place of deep compassion and consideration for others and the world.

“His behavior and commitments were informed and connected to a profound greater picture and tender human story. He was a skillful teacher and eager learner. The synagogue created a space for people to stick together through grief and celebration, learning, growing, supporting, and building.”

That led her, as she puts it, to try putting “both feet on the rabbi path.”

Slakman, who lives in Brooklyn Heights, and has worked for three years at Brooklyn Heights Synagogue, also has a strong desire to create art, and even maintains a website of her art although she’s reluctant to talk about it because there’s no new work on it. What she will talk about is the role of art in Judaism, and particularly in her Judaism.

“I am interested in using art to explore, uncover, study and transmit the many layers of our Jewish story. For example, my rabbinical school thesis involves engaging in visual midrash — relying on symbols, stories and archetypes found in the book of Samuel to render portraits of the women depicted throughout King David’s life. Art, like midrash, has the power to connect dots between previously disjointed or overlooked concepts and uncover meaning far beyond the central message, she said.

She says that what she knows of Temple Micah suggests she will find an emphasis on connections here as well. “I understand that Temple Micah is exceptionally successful in connecting being Jewish and doing Jewish to the multifaced layers of people’s lives, realities, desires and capacities. . . I can’t wait to share stories, songs, questions, realizations and moments of study as well as visions and steps toward a better future.”