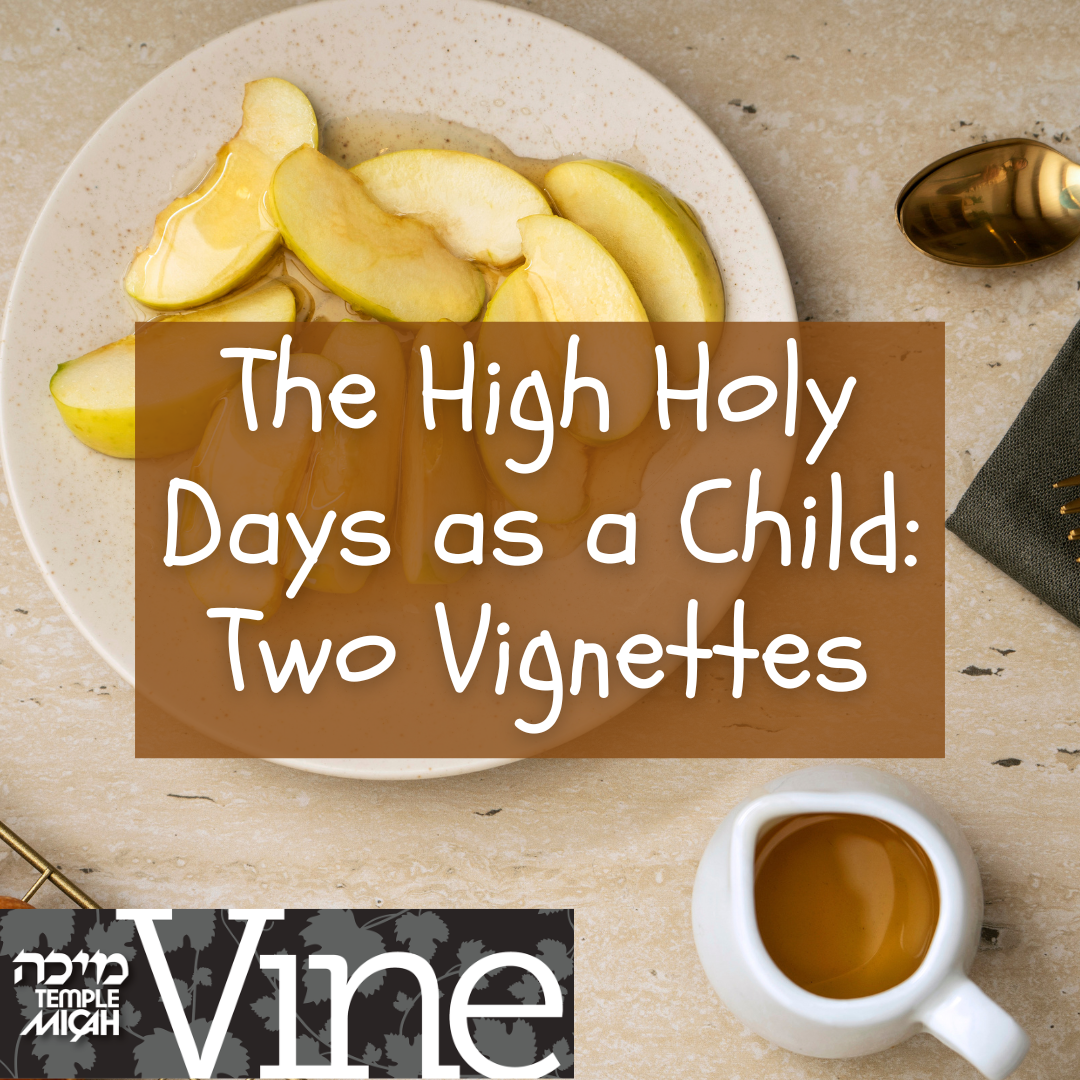 The Jewish new year is the holiday of apples and honey, or if you grew up in a synagogue and went to children’s services on the high holidays, the holiday of slightly browning apples and honey. The apples–red ones, rarely green–cut into slices, arranged on thin, white paper plates, were distributed by parent volunteers who had dipped out of the service early (pun intended) to prepare for the hungry children who had waited anxiously for the last hour, maybe more, while being shushed by their parents each time the rabbi spoke.

The apples were generally mealy, and in my mind, though this no doubt holds some truth to it, were also touched or breathed on by every single child in the room. Neither the browning nor the mealiness mattered much (to me or anyoneelse under the age of thirteen) for the generous amount of honey drizzled over each plate–so much that it was nearly impossible to reach for an apple and come away without a sticky mess dripping down your fingers. The significance of the ritual was intensified by the waiting–moment after agonizing moment–for each child to take a slice and for the rabbi (who still had more to say, naturally) to bless the apples and therefore give us the go-ahead. Neither the distribution of apples nor the blessing unfolded with any urgency despite the fact the honey was dripping down our fingers.

“Does everyone have an apple?”

“So and so needs an apple.”

“Now everyone has an apple? Okay, good.”

“Who knows the proper blessing for apples and honey?”

A collective sigh of relief after so much anticipation.

Having worked that same muscle of waiting we were coming to know so well as Jews (an important lesson for our people, and maybe that was the hidden lesson in all of this), we were truly thanking God for our brown, germy, mealy, honeyed apples. To me, no truer prayer had been muttered all morning.

The running time of the original Godfather is two hours and fifty-five minutes, which means you could watch it from the opening wedding scene to its last credit in less time than the average high holiday service of my youth. The Talmud records that a student who stood to lead prayer dragged on for too long prompted complaints from the other students to their teacher, Rabbi Eliezer, saying–“How long will this guy go on?”– Rabbi Eliezer responded, “Is he going on longer than our teacher, Moses?  Was it not written that he prayed for forty days and forty nights?” (Brachot 34a)

I used to assume that to endure a high holy day service with one (or, for the extra pious, zero) bathroom break(s) was the true responsibility of Jewish adulthood. Until you reached that age, it mattered little if you were one of the many children in the vestibule of the synagogue bathroom, “still going to the bathroom” or “still waiting for my friend to come out.” I would routinely leave the service to meet my friends while the grown-ups were on their seventeenth responsive reading, and the cantor in the middle of that prayer for which each word was elongated, slowed, and then repeated– you know, that one?

Judaism’s elaborate legal system, with laws about every aspect of living, does not specifically stipulate the proper length for a worship service. Neither will you find any laws regarding how to handle a shofar. But just as a service leader can abuse his or her privilege of leading a service, a shofar can pose a threat to those in its way. I know this because one high holy day season bathroom break, a friend swung his sports coat around like a lasso, with a shofar inside his coat pocket. The coat, and so the shofar, hit me with enough force to draw blood and scare away most of the other kids. At the hospital it was determined that I wouldn’t need stitches, just a prescription for extra apples and honey. That was an offer I couldn’t refuse.

What I learned that day was that it would have been better to stay with my parents, all of us together, learning to find meaning in the Jewish new year. I was, after all, close to the age of responsibility. As Vito Corleone says to his godson, “A man who doesn’t spend time with his family (in services?) can never be a real man.” And so it was that I learned to sit through an entire high holiday service, without any bathroom breaks. How pious.

This article originally appeared in the September/October 2022 issue of the Vine.